Baseball fashion may not be known for its trends like the NBA, or its growing new wave of cups suited to the NHL, or its bold and exciting variety like the WNBA, but MLB players have come a long way. come a long way lately. years. It’s rare that we get to see them dress up and show off, so it’s only fitting that we honor their hard work.

A panel of Athleticism MLB editors (Kaci Borowski, Lauren Comitor and Kamila Hinkson) rounded up their favorite red carpet looks ahead of Tuesday night’s All-Star Game. There were plenty to choose from, but here are their top 10 and a few more shoutouts from the night. (And, as always, let us know your picks in the comments below.)

Shohei Ohtani is so good at baseball. It could have sucked one thing. Instead, he has the nerve to show off like that. It gives “I’m a bit dangerous, like ‘I could be Vincenzo Cassano’s right-hand man’ danger levels” (thanks to the K-drama fans out there). —Kamila Hinkson

Yeah, if you hoped that Shohei would at least show other players mercy stopped the ground, the answer is no. At first glance and in a certain light, it looked like a classic but simple adjustment of the reigning AL MVP. Once I saw the color scheme — the smoky teal suit and safari green knit tie with brown leather accents — it was over. The absolute definition of California cool. —Kaci Borowski

Ohtani has graced the pages of GQ before, so the fact that he rocked the red carpet should come as no surprise. Still, he absolutely crushed it, just like the first pitch he saw from Clayton Kershaw a few hours later. —Lauren Comitor

The energy of the main character 🔥

Martín Pérez took a big risk with this and it paid off. The pattern, the cut, the accessories – all perfect, and you can tell he feels amazing in there, which makes him even better. Bad Bunny has probably passed this message on to his stylist already (as he should). —Ko

I usually don’t like florals, but I love this look because I can’t take my eyes off it. Despite the optical illusion, it’s obvious that the jacket and pants fit him perfectly. I don’t think I like the shoes but that’s okay. —K.H. 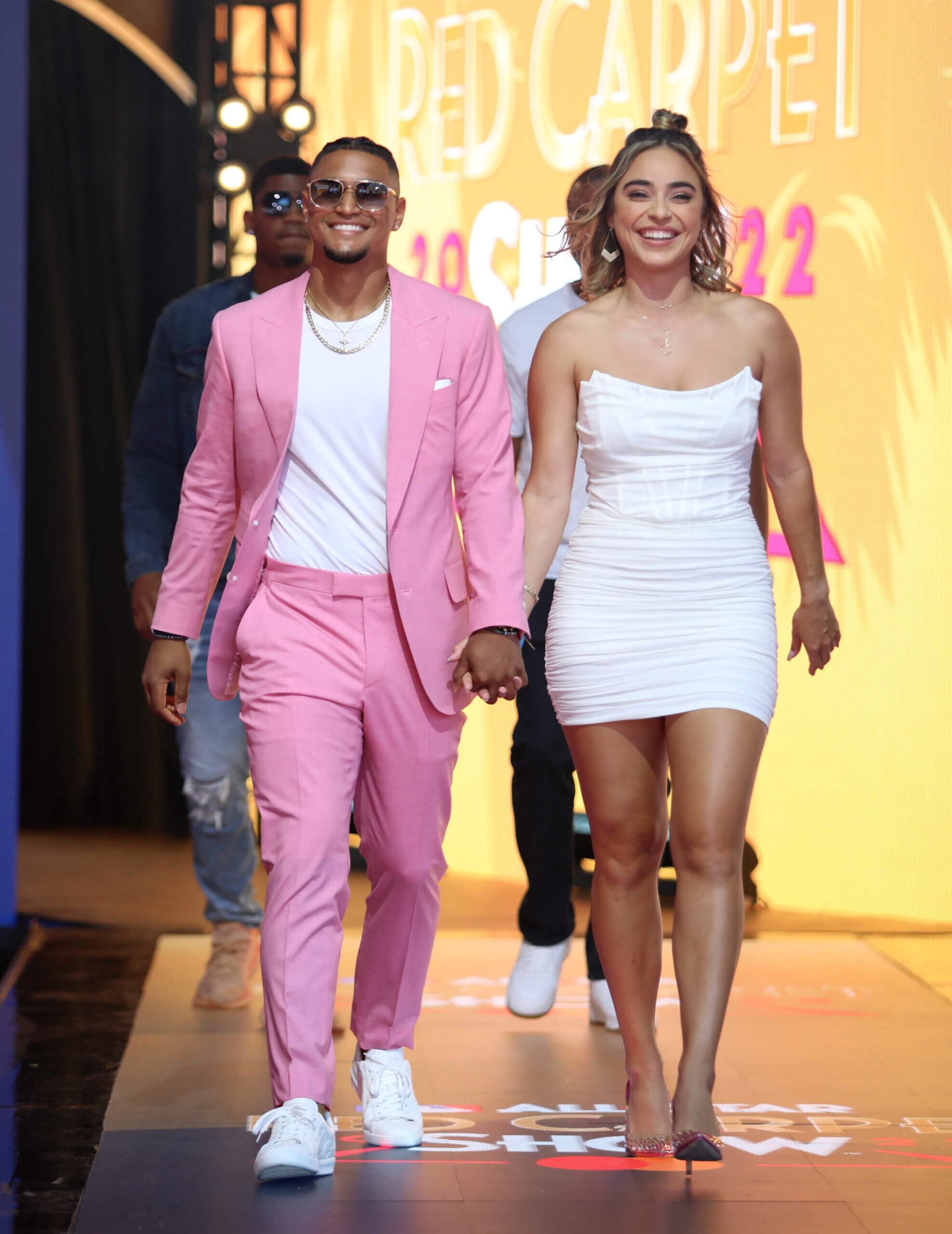 Santiago Espinal may have been a late addition to the All-Star Game, but he came prepared. He kept the accents minimal but airy and let the pop of bubblegum pink speak for itself. It’s veteran stuff! —Ko

I’m not sure this set would look this good on someone else, but Dansby makes it look great. I see you, perfect curls above her right eye and Mal Pugh in that dress. —KH

You have to stick to a double-breasted suit, and Dansby does it here, with a peachy brown color and suede boots. —LC

It’s a classic case of knowing what you’re working with and celebrating accordingly. The color and cut of the suit, the layering of those chains, the sunglasses. That’s it. —Ko

It was hot in Los Angeles on Tuesday, so you can’t blame Starling for popping a shirt. He pulled off this look and topped it off with appropriate flashy accessories. —LC 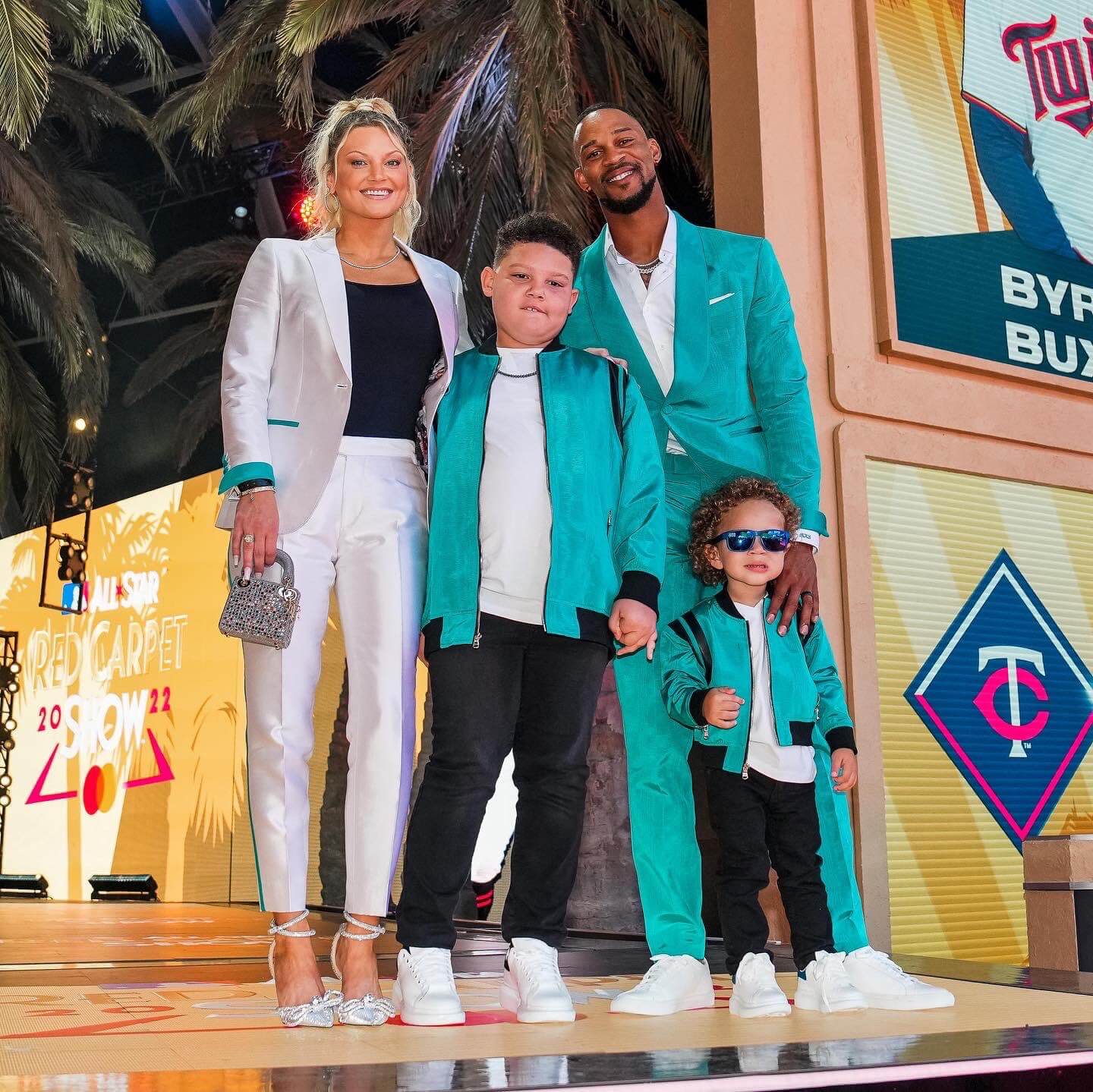 Byron Buxton and his family. (Courtesy of the Minnesota Twins)

Once again we have a man in a loud color. I’m into aquamarine. Someone sent me one of the boys’ jackets in a women’s large (just kidding). —KH

The family coordination here is just *chefs kiss*, from the kids’ jackets to the accents on the white suit. Byron ties it all together with a perfectly tailored costume that features a subtle, interesting texture and color that’s very appropriate for the spot. —LC 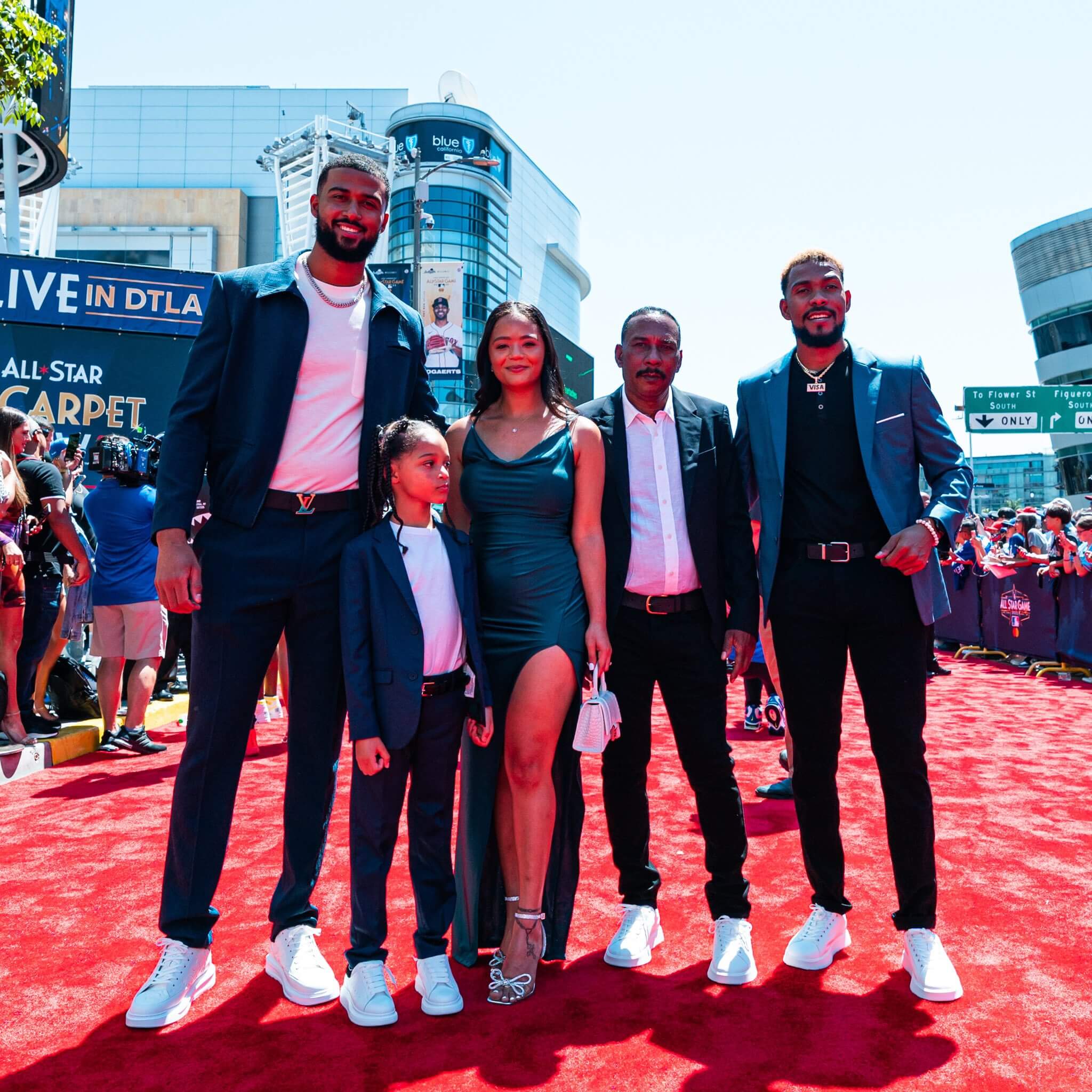 Sandy Alcantara (L) and his family. (Courtesy of the Miami Marlins)

Another look that I think works because of the person, not the clothes. Very simple and classic colors, but it looks great. —KH

The modern take on a traditional suit would suffice, but the deep teal blue and subtle pattern (see tweet above) takes this to another level. There’s a joke about throwing heat here, but I’m not going to. —Ko

It’s simple and elegant with beautiful details (the belt!) and we have to give some points for the family coordination. —LC

Julio Rodríguez was the star of the Home Run Derby and he did not disappoint with his follow up act. This ensemble of silk separates with a paisley print is about as confident as it gets, which seems appropriate. —Ko

Rodriguez comes looks like a guy who announced himself to the league in a big way in Monday night’s Derby, right? The purplish gray ensemble, necklace and sunglasses are just plain cool. —LC

I love its color scheme and the clash of powers, and the platinum accessories are a nice touch. Dusty is already in post-season form on the fashion front. —Ko

I don’t really like the tie but the jacket is great. And I have to give Dusty props for bringing in a tailor to outfit all of his fellow coaches. I can’t root for him. —KH

You can always count on Tim Anderson to do his own thing, and do it extremely well. It was a dressier look than others, but the Louis Vuitton sneakers and custom bling really did it for me. —LC

One of the best parts of the ASG red carpet every year is the offspring, and we’d be remiss if we didn’t show them some love. Surely in 20 years we will hear some of their names in the MLB Draft and wonder once again how we got so old.

Can Beckham Trout even still tie his own little Gucci shoes? You know what, he can probably do it, he’s Mike Trout’s son! —LC 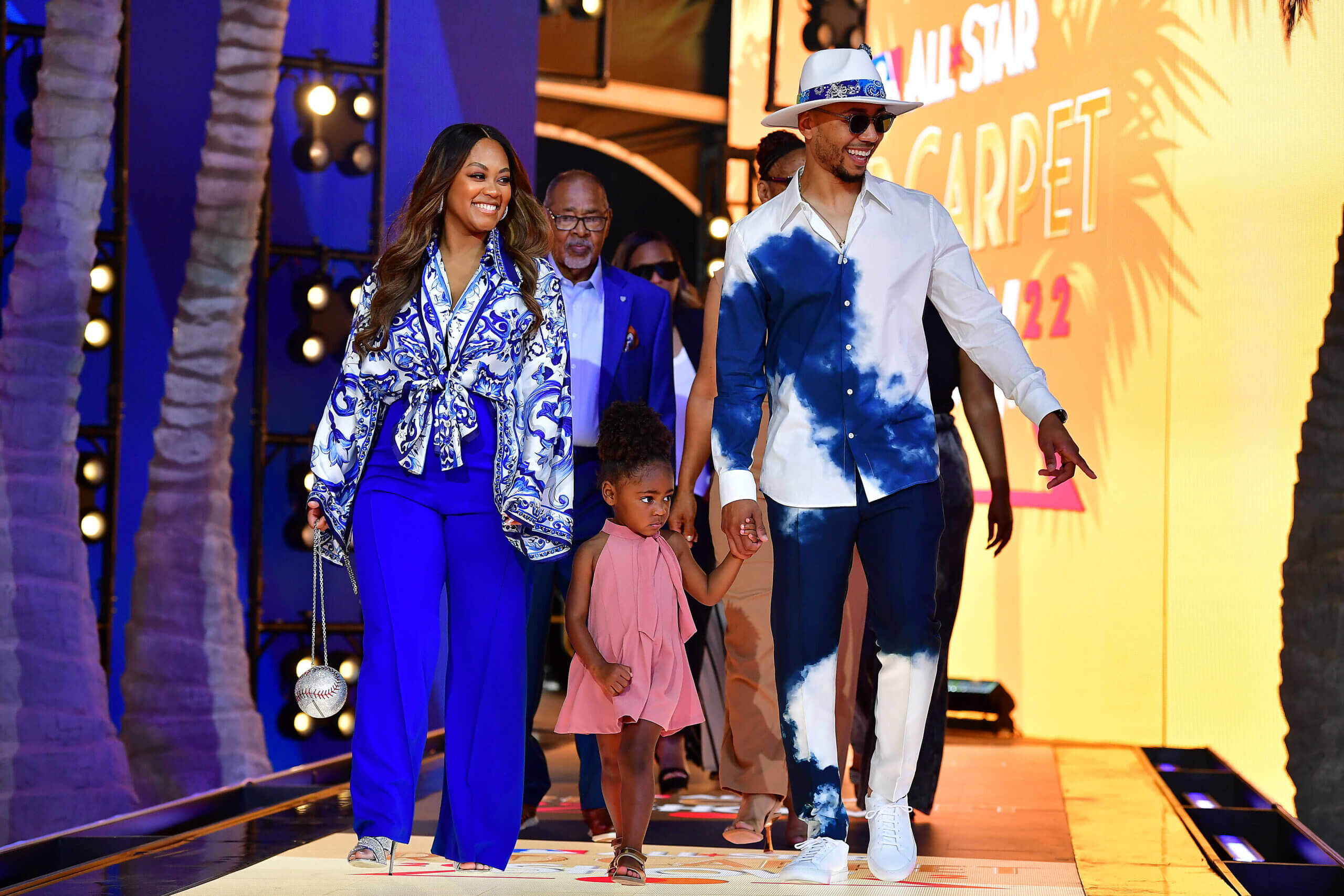 I’ve never been on a red carpet, but in case I walk one, I hope I have the composure of Miss Kynlee Betts. Look at this face. Imperturbable! I love the dress and the hair. —KH 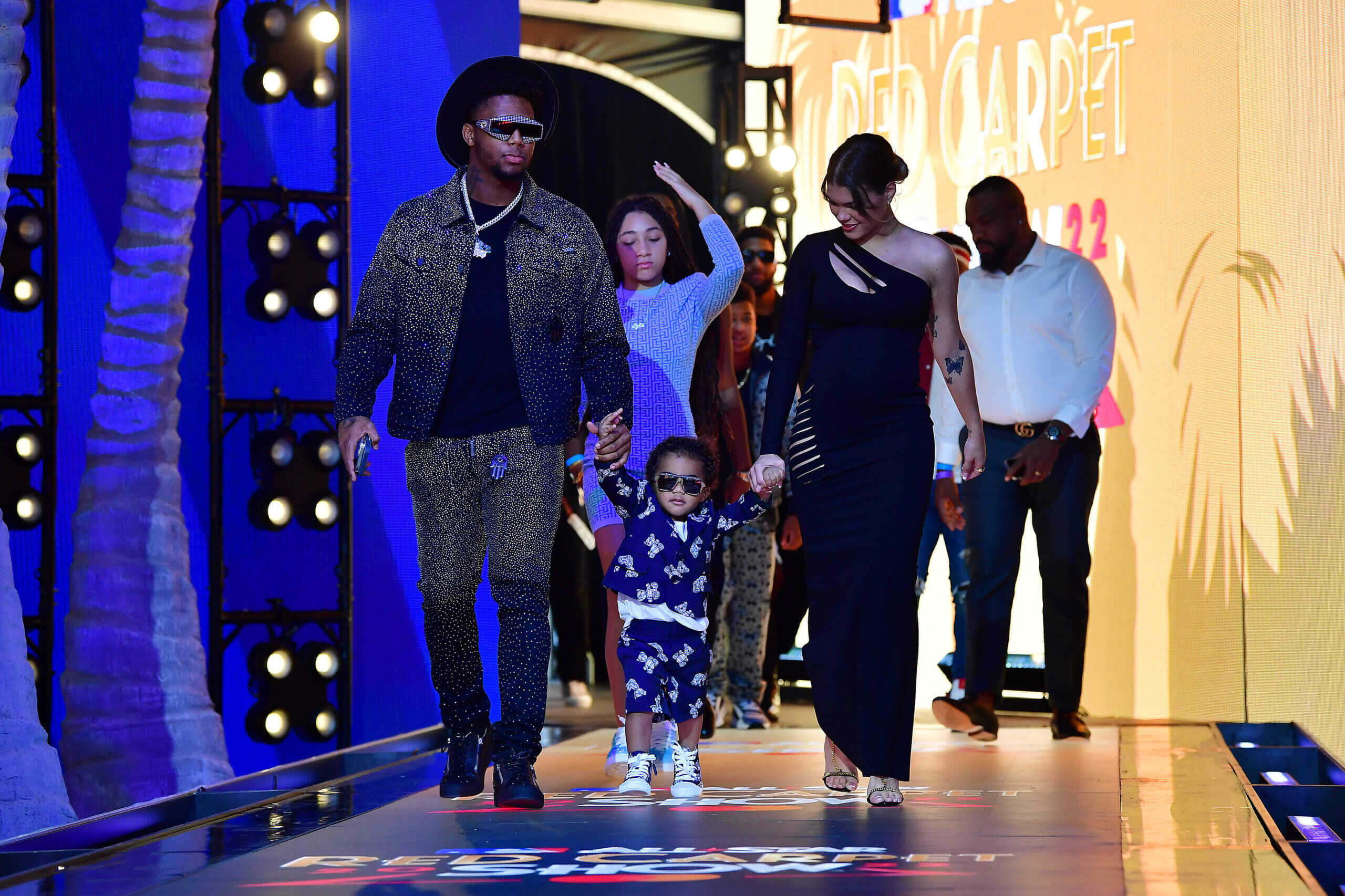 Just sitting here thinking about the fact that I’ll never be as cool as this toddler in my life. —LC

Jose Trevino and his son stopped by the red carpet in matching costumes ❤️ @HipHipJose5 pic.twitter.com/jFndegBegK

The metallic floral accents, the sneakers, the proud posture. It’s a star. —Ko

As a Quebecer and someone who appreciates a little commitment, I feel like I have no choice but to comment on the pin. I had a good laugh at video created by the Mariners for the Vote France campaign. Also bless the Dodger Stadium organist for playing “La vie en rose” while at bat in the game. —KH

I thought these jerseys were a bit boring, but of course that was before I saw Jazz Chisholm Jr. wearing one. The golden hair, the glasses, the chain? Now I am a believer. —KH

The whole Contreras clan looks fabulous, and I love Willson’s unique cut, but we have to give it up for Dad Wuiliam. The bold color is awesome, and the white loafers take it up another notch for me. —LC